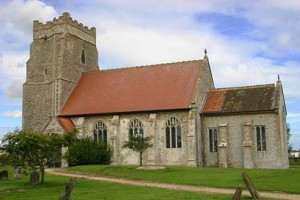 Longham Church belongs to the group of churches which include Gressenhall, Wendling, Bittering and Mileham.

The Rev Robert Marsden is the priest in charge, and our thanks to Rev. Vivian Singh, Rev Kevin Bloggs, reader’s Jan Sexton, Barbara Marsden and Lay Chairman Malcolm Woods for helping Robert with our services.

We have no churchwardens at present

History of the Church

The Church is approached from the South East across part of the park, now under cultivation, belonging to Longham Hall. Starting at the South Porch, we will consider the outside of the Church going in an Easterly direction before going inside.

There are three Perpendicular windows in the South side of the Nave. These have embattled transoms in their centre lights and they also have the remains of head stops. Right at the eastern end in the angle of the last buttress can be seen the outside wall of the turret stair leading to the rood Loft. The nave which was restored and re-roofed in 1898 fro £430 – raised by subscriptions – is covered with Broseley tiles. A Decorated cross on the East end dated 1626 in brickwork was found to be unsound in 1898 when it was rebuilt. The present cross was placed there in 1965.

The Chancel was entirely rebuilt in 1867 by the Leicester family. It has a pantile roof and a floriated cross on the East end. On the South side there are two Perpendicular windows which were reset in their present position. A ball flower can be seen at the eaves level at the Eastern end. The vestry is situated on the North side and there is a rather odd buttress on its Western end – this being half angle, and half diagonal.

The Tower has two board angle buttresses on its Eastern corners and two diagonal buttress on its Western corners. This gives it a very powerful squat appearance when seen from the East. The buttresses have some flushwork. The west window is Perpendicular with three lights. It used to be longer than it is now. It is recorded that the top stage of the tower was taken down in 1788 for the sum of £55 and that the upper stage was added in the 19th century by J.S.Hastings ( whose memorial is in the Chancel). It is thought that the tower used to be higher. There were 6bells in Edward VI time and a faculty was obtained to sell a badly split bell weighing 7cwt in 1757. Another bell was sold in 1788 and this weighed 14cwt and fetched about £25. Later yet another badly cracked bell inscribed “Thomas Draper me fecit 1583” was sold and replaced by a new one costing £70. This one was cast by John Warner and Sons, London, and is inscribed “Sancti Petri cum voco ad templum venite A.D. 1888”. The turret stair can be seen in the angle of the buttress at the South East corner of the tower.

The south Porch is Perpendicular. It has a segmental arch which is totally different from any other arch in the Church and was probably brought from some ruins and placed on top of semi-octagonal jambs which belong to an older porch. There are shields on the capitals and there is a panel with a shield in each spandrel. The South door is also Perpendicular.

We now enter the Church through the South Door which leads straight into the Nave. The setting for brass can be seen in the slab just inside the door.

Looking Westward towards the Tower, we can see a niche in its North wall. The fine Tower arch is Perpendicular with panelled bases. The marks can be seen above the Tower arch showing the old roof line.

The Nave was restored and re-roofed in 1878 for £430, the money being raised by subscriptions. It has hammer beams with arch braces. The Church was re-seated at the same time for 100 people. The Font is Perpendicular with a lead-lined octagonal bowl. The shaft is panelled and there are fleurons under the bowl. The Pulpit of carved oak was erected by the daughter of John Sutton Hastings to his memory. There is a memorial tablet to him on the South wall of the chancel. An interesting stone is set in the very top of the East window on the South side. This stone must be the drain from an old piscine reset there. A plain Perpendicular niche can be seen in the South east corner of the nave by the Rood stair turret and entrance to the Rood loft. These were opened up in 1898. To interesting stone brackets can be seen in the east windows on the North and South sides of the nave. It is possible that these supported the Bressummer ( main beam ) of the Rood loft. If this was the case, then the loft would have cut right across the top of the screen. In fact it is believed that the screen was reset here from another Church during the 1867 restorations. The Screen is late 15th century Perpendicular and was recently restored by Mr Royal who removed a lot of dark brown paint. Some of the original colouring can still be seen in the lower panels. The Organ was dedicated on December 21st 1919 as a Thank Offering for Peace after the Great War and the Electric Blower was dedicated in 1958. The alter rails in the Memorial Chapel in the South East corner of the nave came from St.Peters Church in Great Yarmouth and the crossed keys of St.Peter can be seen on the shields.

The Chancel is entirely modern having been entirely rebuilt in 1867. It “weeps” to the South, but experts think that this was due more to careless building than to any particular reference to the position of Christ’s head on the Cross. The wording on the memorial to John Sutton Hastings is also worthy of noting on the South wall. The first Rector was John de Castleacre in 1308 and the Registers date from 1558.